Free food in government hospitals rescues a child from hunger

“When my wife was admitted to hospital for delivery of our second child, I had no idea what to feed Yash, our 9-year-old son. Neither can I cook nor afford food from a restaurant or canteen. So, we were totally dependent on street food like vada pav and samosa pav. Indeed, I was happy at the birth of our second child, but I was also worried about my elder son’s health because I was continuously feeding him street food. When I heard about Akshaya Chaitanya’s free lunch service, I was relieved that at least now I could feed him a stomach full of good lunch”, says Santosh Choudhary. 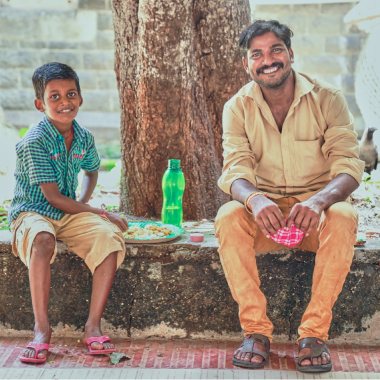 Santosh used to work in a tea stall in Colaba, but lost his job during the COVID-19 lockdown. Since then, he is unemployed. He used to have a monthly income of ₹9,000. Due to loss of job, Yash’s schooling also had to be stopped.

Santosh’s wife Nibhadevi was admitted at Cama & Albless Hospital for the delivery of their second child. As a caretaker, Santosh had to stay with his wife. So, he used to go home late night and bring Yash along with him to the hospital in the morning. In the evening, he sent Yash home with one of their neighbours who work in a nearby hospital. So, he had to not only take care of hospital expense that summed up to around ₹30,000 - ₹35,000, but also of back-and-forth travel as well as food cost. When Santosh got to know about the free lunch service in the hospital, he was relieved for he could feed one good meal to his son, completely free of cost. Santosh’s wife was hospitalised for 17 days and for 14 days Santosh and Yash benefitted from the Hospital Feeding Programme.

JOIN US AS AN INDIVIDUAL DONOR
BECOME OUR CORPORATE PARTNER
Note: All contributions above ₹500 are eligible for tax exemption under Section 80G of the Income Tax Act.