Sole breadwinner of a family of five … lost income since COVID-19 lockdown … daughter admitted in hospital … exhausted the loan amount taken to meet hospital cost … trying every possible way to meet daily expenses … can’t even think of spending money to buy food - this is the state of affairs of Puroshttam Motewad in GT Hospital, Mumbai.

Puroshttam’s daughter Kalpana is a bright student studying in Standard IX. She is one of the toppers in her school and equally excels in sports especially kho-kho. Kalpana suffers from backbone problem and has been admitted in GT Hospital. She has already undergone a couple of surgeries. Doctors have advised complete rest for next one or two months along with refraining from sports. 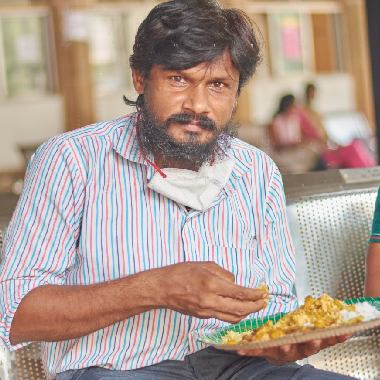 Puroshttam worked as a social worker in Latur with a monthly income of ₹10,000. Once the pandemic hit, Puroshttam’s income decreased and eventually he lost his job as he and his wife had to accompany Kalpana for treatment in Mumbai. His wife takes care of their daughter as an attender and Puroshttam spends his days inside the hospital premise. He has exhausted all his savings as well as the loan of ₹10,000 that he had taken for treatment. It has been more than three weeks since Kalpana was admitted. Though he is receiving help from his cousins, yet the expenses are taking a toll on him; so much that he can’t even think of spending money for food.

“Being a social worker, I have witnessed many disheartening hospital cases, but until someone from our own home get admitted, we don’t realise how difficult days can get. It’s very difficult to survive like this. I am mentally stressed; my daughter is not recovering and there is need for money on a daily basis. I can’t even think of spending money to buy food for myself. Unlimited meals from Akshaya Chaitanya helps to a have a stomach full of food and this is the only good thing we have in day.”

JOIN US AS AN INDIVIDUAL DONOR
BECOME OUR CORPORATE PARTNER
Note: All contributions above ₹500 are eligible for tax exemption under Section 80G of the Income Tax Act.